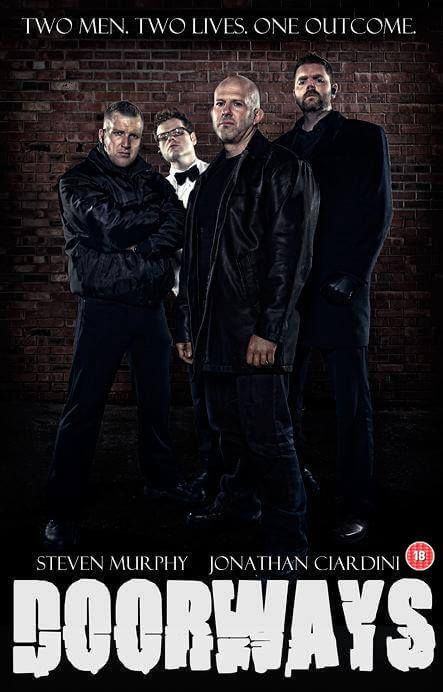 A young man embarks on a search for his masculinity by becoming a bouncer. He meets Craig who has been doing it for years and it is all that he knows. The two embark on a story of self-discovery in which they both uncover secrets about themselves; and the young bouncer soon realises there are many more elements to being a ‘man’ than he thought as their journey spirals out of control leading to murder.

I took my play DOORWAYS to a local theatre group where Cristina Artemis became a mentor to me. She encouraged me to bring my play along for the group to read. I was nervous as I had never shown it to anyone before, yet alone had it read out aloud. It was clunky and too long, but I had completed it and it was there.

I was encouraged to rewrite it and then we staged it.

I wrote it with simplicity in mind – just a two man play and no props, apart from a doorway. It was based on my time as a bouncer and how I used to stand in doorways for a living, experiencing life and and all of the wonderful and crazy characters that nightclub life brings you.

Standing there night after night, witnessing people enjoy themselves, whether it be a christening, stag or hen night, Christmas, St Patrick’s Day… or sad times.

I would see life from that doorway and would dream about making something of myself, but I just didn’t know how. I was scared that I would be forever stood in those doorways.

I went along to a local pub with the intention of staging my play there, they agreed and allowed me to take the door money and they would have the bar. I asked my university friend, Jonny Ciardini to act in it with me and we just did it.

It was the best time of my life! Selling out three nights in a row, and with it, gave me the confidence to make the film.

I adapted the play into a screenplay, even although I wasn’t sure what I was doing. I then gathered everyone who I thought could help, then storyboarded out a trailer.

Everyone kind of laughed at me, saying I would need thousands to even make a trailer. So I got Jony and a camera and we made a very rough trailer that went down really well on social media. Now I had people’s attention.

Whilst searching for a Director of Photography, I met with several people who all pretty much laughed at me, saying they would need £10,000 just for lighting.

Whilst listening to a Shane Meadows interview, he said he made Dead Man’s Shoes with just one light, so I knew I could make my simple film ona budget.

Dominic Tomey and Emma Pengelly-Philips came on board as producers with me, Mark Baggot was assistant director Matt Price on sound and Jon McLovin on camera… and we worked our socks off!

I sold many of my belongings and taxi to raise funds. I only directed as I couldn’t afford one, I hadn’t a clue what I was doing, so I watched as many director’s commentaries as I could and read several books, but I think that was a blessing not knowing what to do as I didn’t follow any rules. I simply did it.

Now I wanted to make more.